Posted on December 5, 2019 by Editorial Staff 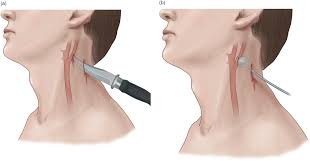 That phase of the year that needs more caution because of its susceptibility to unpleasant happenings is the ‘Ember’ months phase and December is not an exception. 2019 nears its end and it weighs the heart with some unpleasant occurrences especially with the recent neck trauma occurrence.

It’s no longer news that a young lady Moradeun Balogun, was robbed of her laptop and later stabbed in the neck at Gbagada, Lagos Nigeria. She was rushed to a private hospital that rejected her due to the absence of police report and was referred to Gbagada General Hospital where she was declared ‘Dead on Arrival’.

The neck region where the victim was stabbed is a very sensitive part of the body. It contains different arteries and veins that carries blood to and fro the body. So neck trauma can cause significant morbidity and mortality. A patient with penetrating neck trauma should be examined promptly in the emergency room.

Blunt neck trauma: Blunt neck trauma may not be initially detected due to injuries of other anatomical areas including the chest, abdomen and head. Causes of blunt trauma include motor vehicle collisions, where the unrestrained passenger’s neck can decelerate against the steering wheel. Also, the shoulder harness portion of the seat belt can create a shearing injury to the neck. There may also be blunt trauma from airbag deployment. Blunt neck trauma can also be caused by clothesline-type injuries (from activities such as football or running into a tree) and bicycle handlebar injuries.

Rapid transport to the hospital: As the case may be, in Nigeria, it is advised that emergency victims be taken to general hospitals and not private hospitals. General hospitals usually have the resources to attend to emergencies and Trauma.

Resuscitation: Endeavour to keep talking to the victim to help him/her stay conscious.

Secondary survey: This includes palpation of the neck to check for collection of blood outside the blood vessels.

It is  worthy to note that existing systems have failed us in Nigeria. In this regard, the health sector, the security sector even the Nigerian society at large. Yet, we can’t keep folding hands and claiming to be unconcerned.This underscores the impact of HEI as a non-profit organisation that focuses on helping the vulnerable in emergency situations live through provision of funds to resuscitate and stabilize the victim. HEI also trains people to be effective First Responders certified by the American Heart Association. Join us today, support Project 1 million aimed at saving lives THAT NONE SHOULD DIE.