SAVE A LIFE WITH EMERGENCY HELPLINES 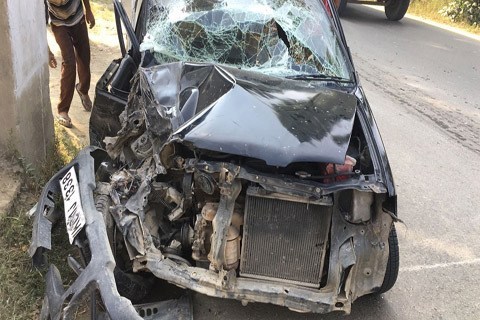 Mr Jide and his family travelled for his sister’s wedding at Ijebu Ode, on their way back to Lagos when they got to Abeokuta, they had an accident. Mr Jide being a Lagosian knows Lagos’ 112 and 767 emergency helplines but didn’t have a clue of any emergency helplines outside Lagos nor the first aid care of how to attend to his injured wife who was not using seat belt at the time of the accident and his son Ope, a 5 years old boy notable for always hopping around. Mr Jide managed to escape serious injury while his daughter Tosin was unhurt as she was sleeping at the time of the accident and had no idea of what really happened.

Before, he could get the necessary help needed from other road users and the Federal Road Safety Corps his wife Ariyike was gasping for breathing while his son had lost consciousness. By the time, the critically injured mother and son got to the hospital, Ariyike was dead on arrival while Ope gained consciousness after some days.

It is important to always be safety conscious at every situation, Ariyike has no justification whatsoever for not using her seat belt and Mr Jide should have reminded her to use it. Furthermore, Mr Jide could have managed to save his beloved wife’s life if he knew the  emergency helplines of his location and had knowledge of first aid treatment.

Hence, Health Emergency Initiative in the plight that NONE SHOULD DIE hereby gives a catalogue of the helplines across Nigeria. You can EMERGE with us by donation or volunteer.